Prepared to get weepy, I opened a photo of the dog one news organization described as “guarding” his dead master’s casket in Houston.  It appears, though, that Sully is actually sleeping on the comfy carpet.  This is the kind of “guarding” that might get a human sentinel court-martialed, or — in wars past — shot. 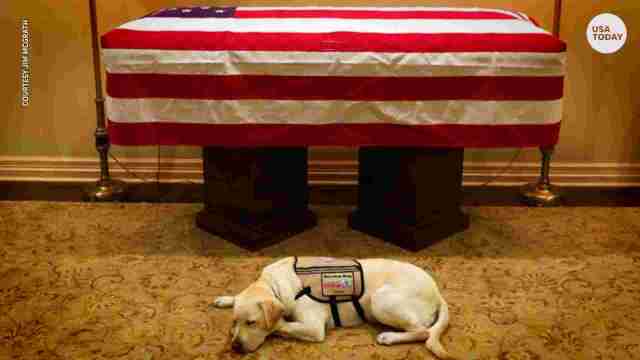 I next watched a news video that purported to show Sully “honoring” the late president lying in state,  when to all appearances he is actually checking out the crowd,  looking to his handler for instructions, relaxing, and briefly trolling the floor hopefully for crumbs.

In other words, without the Hallmark Channel overlay,  Sully was behaving like an ordinary, unconcerned dog, not Lassie or Rin Tin-Tin. To which I say:  Yay, Sully.

If animals teach us anything — and sometimes I think they teach us everything — it’s that the ever-changing real world is larger and much more interesting than the bloated and stodgy dramas humans create.   This is not to say animals don’t form close bonds with companions, and don’t feel their loss.  They experience grief; yet, they do not dramatize or perpetuate it in the self-absorbed manner of people.

In this case, Sully hardly had time to form a deep bond;  he was with Bush just six months.  And yet narratives rife with melodrama are being foisted on the poor guy as the media seeks to wring every last drop of high emotion from the story of a president’s passing. But that dog won’t hunt.  Sully appears less interested in human projections than a biscuit, and whatever intriguing thing the next moment brings.

This in no way diminishes the death of a man whose long life of public service recalls an era of courage, duty and modesty, values many of us miss.  Nor does it belittle human loss and sorrow:  Grief as we experience it can be deep, complicated and long-lived. (Personally, I hope to reincarnate as an animal because I’m weary of being run around by a human brain when I could be stupidly happy fetching sticks, lying in the sun with my paws in the air or prowling through Nature.)

Rather, this dog’s story — the one that’s evident, not fabricated —  reminds us again of the unadorned wisdom of animals, who are so present,  so engaged and yet so matter-of-fact about living and dying.  Like Sully, they are content to inhabit their moment-to-moment lives,  looking not back but always out, at the wide world before them.  Not the grandiose human drama of death for them, but the simplicity of an embodied life. Always life.