“Ball!”  barks the guy behind the mound.

It’s the first practice of the high school season so there’s no one calling pitches at the plate.  Everything is casual.  This guy – the coach or maybe a father, a ball cap hiding his thinning hair, his gut doughing over his waistline – is sighting the ball from behind the pitcher.

No matter;  the calls aren’t hard to make.  The hurler can’t keep the ball out of the dirt, and his fastball is so far inside that batters are jumping back from the plate to save their ribs.  It’s an occasion when he finds the strike zone.

The aspiring hitters are equally callow.  One loses track of the count, steps away from the plate and drops his bat. “Austin!” yells the coach/dad.  “That’s only three balls!”  Back into the box, but one ball later, Austin – he looks to be 5′ 6″ or 5′ 7″ and weigh about 90 pounds –  jogs tentatively to first.

The boys are 15, 16, give or take a year; most are lanky as colts and not half as graceful.  Puberty is toying with them at visibly different rates, and it’s unclear how it’s all going to turn out.  Diffident and episodically earnest, they lack the bravado some will acquire later.

They are still strangers to discipline, to the work of paying attention.  The outfielders, stupid with inactivity, shift distractedly from one cleated foot to the other.  Half there, half not, while an abruptly summer sun pulls color into their smooth winter-pale cheeks.  They’ve given up on the long ball and are daydreaming:  the learner’s permit, or the license itself. The secret object of their shy affection.   A growing sense, new and not entirely welcome, that their parents exist apart from them, and not always happily. 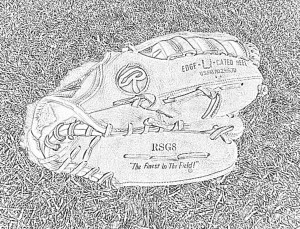 The life of their minds, opening, flexing and closing with an uncertainty that matches that of their bodies.  Time has begun, and all it will ask of them —  all it will give and take — is edging uneasily over the horizon of their adolescent awareness.

But today, it’s still simple, which is not to say easy:   The pitcher can’t find the zone.  Desultory hitters advance to first and then around the diamond on balls and stolen bases: another errant throw, the flurry of thin limbs sprinting pell-mell to the next bag, rousing the infielders momentarily from their torpor.

Austin’s on third now, leading off and suddenly alive to the opportunity before him, which arrives with the next pitch.  The weary catcher, slowed and clumsy with exertion, scrabbles again in the dirt for the ball, now behind him.

And all 90 pounds of Austin is flying home, skinny legs churning,  widening eyes fixed on the plate and nothing else.  Sliding, then, awkward and fierce, into a nimbus of winter-dry dust.

“Safe!” hollers the coach, from behind the mound.  “Safe.”

← We gather again, broken
One shot →