My best human interaction this week occurred not with a friend, nor a family member, nor even a co-worker. It occurred with a stranger, an arborist who had come to take down part of my dead Siberian elm.

He arrived as arborists will, with a massive truck towing a wood chipper. Before he had even parked, he had done damage, clipping two healthy evergreens near the road in front of my house, dropping a low-hanging branch from each. Not a good start, and I was already anxious about the job.

The elm, which had provided a shady canopy over part of my sun-washed deck, died when an arctic front moved through in November 2014, freezing the sap still flowing in its veins. The loss shocked me. For decades, the towering old tree had been hardy and uncomplaining, surviving through years-long droughts while other trees and shrubs withered. Losing it hurt.

In the time since, though, I have seen consolations: the small blue spruce once shaded by the elm straightened its eastward tilt and pointed skyward. A peach tree beneath the elm put on a verdant new leader, blossomed for the first time and is now carrying the kind of peaches you see only in Harry & David catalogs: big as tennis balls, burnished rose-red.

The finches, pine siskins and chickadees perch easily in the elm’s bare branches as they plan their approach to the feeders. And the tree itself has become food: nuthatches and woodpeckers mine the conjoined trunks for bark beetles living in the decaying wood.

In death, the tree has mingled with life, so I had carefully considered how to maintain the bird habitat while also protecting my house from the big, bare branches that would eventually cede to wind and gravity. Still, I knew the day of the trimming would be difficult, that the violent yawp of the chainsaw would open a hole in my chest as it took down part of my good tree’s skeleton.

I know that hole:  Grief. And fear, too — of how the tree’s diminished presence would affect me no less than the wild things.

I didn’t want to feel that. So when the arborist clipped the evergreen branches, I was angry. I jumped him about his carelessness before he was even out of the truck, assuming aloud that he would be similarly heedless with the elm and the smaller trees beneath it.

He apologized and looked at the damage, promising to prune the broken evergreen stubs. But he was defensive. He was a certified arborist, he said, a little angrily — he would show me his paper — and it was an accident. If I didn’t want him to do the job, he would let his boss know, and leave. A wall had come up.

And that was the moment. I felt it, and maybe he did, too. You know the one: the tipping point at which an interaction escalates from bad to worse, or softens from bad to better, or maybe even good. The moment of possibility, made palpable.

“Let’s start over, OK?” I said to the arborist.

“OK,” he said, meeting my eyes, smiling just a little. And we shook hands, and in the next 15 minutes, while we talked about the job, Dustin — that’s his name — answered my tree questions, seeing that I respected his expertise. He told me how much he likes my back yard, the groomed parts and the wild ones, the little homemade pond. He saw how the birds perched in the bare branches of the dead elm.

Dustin has an identical twin brother, Justin. They were both Army Rangers, both stationed in Iraq, and now, both arborists. Justin is still in North Carolina, because his girlfriend is there — she’s in college, seven years younger — but Dustin moved to Colorado because he loves it here. He and his wife have a little redheaded daughter named Charlotte; he told me that after I told him my red Welsummer hen is named Charlotte. Dustin keeps chickens, too.

And then he had to go to his next job; he will have to come back with a bucket truck later to trim my elm with proper care. I apologized again for jumping him; he apologized again for clipping the evergreens. And again we shook hands, and told each other what a pleasure it had been, and I asked if he would come back — him, personally — to do the work. “Of course,” he said with a smile. And climbed into the cab of that big truck.

As I watched him drive off, I realized Dustin and I had done this simple, profound thing: We had been patient. We had allowed each other to go within, to work with our own reactivity, and then to look anew on each other. And in that act, the careless guy with a chainsaw and the persnickety homeowner had given way to two imperfect human beings sharing the same goal, wanting to connect and willing to make that effort. 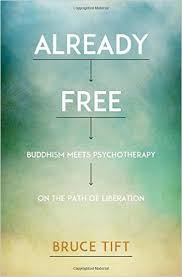 In his remarkable book Already Free, Buddhist psychotherapist Bruce Tift describes what’s necessary in our lives and relationships for optimal growth. “Not enough disturbance is comfortable, but unlikely to bring into awareness what we must work with,” he writes. “Too much disturbance is likely to take us into a dissociative or even re-traumatized state, in which it is very hard to stay present.” What we need, Tift says, is a kind of Goldilocks balance: just the right amount of suffering.

How lucky we are when we experience the right amount of suffering, when we have disturbing experiences with people who don’t walk away when we falter, but give us the opportunity to look within and retrieve our better selves. And, equally wonderful, who accept our gift of the same.

It’s what we want — and, usually, don’t get — in our closest relationships. Instead, we stay on the surface: not enough suffering.  Or, we create too much suffering: proxy conflicts with each other that distract us from the difficult feelings within —  often grief, or fear, or both.   And so we miss the experience of becoming our best selves with those we most love.

Experiences like I had today with a stranger named Dustin, who has an identical twin named Justin, who was also an Army Ranger and is now also an arborist.

Let’s start over, I said.

OK, he said. And met my eyes. And smiled.

← One shot
Being Florence →