My laptop support team, Twigs White Oval on Black (informally known as “Spot”) and Twigs Voluminous Fluffiness (informally known as “Puff” ) have lately been chafing over all the attention given that other species via the Westminster Kennel Club Dog Show, which concluded Tuesday  in New York.

The televised annual spectacle this year involved more than 2,600 canines representing 204 recognized breeds – including something called a Tibetan mastiff, which has the temperament of an extraordinarily expensive cat – competing in apparently arbitrary divisions including sporting, non-sporting, herding and agility.  And, to top it all off, a Best of Topiary, er, Best of Show competition, won by an aggressively groomed standard poodle nicknamed Siba (because “GCHP CH Stone Run Afternoon Tea” sounds ridiculous). 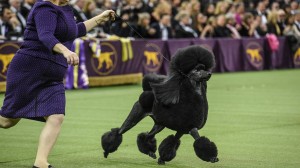 At this morning’s story meeting, the three of us — White Oval, Voluminous Fluffiness and Aging Badly — decided that some sort of rebuttal is in order, and hereby present you with a curated collection of mostly mutt cats performing in randomly determined divisions.

Best in class,  team performance with another species:

And, finally, our choice for Best of Show,  the incomparable Stubby Tail Lookin for Trouble Deadpan Diva,  informally known as “Maru”: