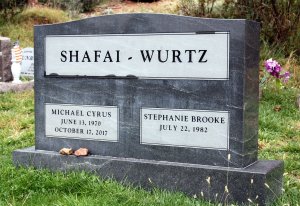 Up the hill from my home is a cemetery opening onto a foothills trail that leads to a high school track, where a runner long sidelined might begin again, might test against age and injury the possibility of recovery, or at least resilience.   And then might walk home through the cemetery, but not before stopping to report her progress, or difficulties, or impossible dreams, to the runner buried there,  who encouraged her in life, and now does so in death.

When I stand at Mike’s grave, I do not imagine his fine, fit physique laid out in a suit, six feet beneath my running shoes.  I do not imagine the stillness of his form, that dynamic body eternally motionless.   I remember Mike in workout gear, encouraging me during hill repeats, during pre-dawn group runs,  during muddy trail races and 10Ks on hilly asphalt.

When Mike died at 47 a year ago —  cardiac arrest caused by an enlarged heart and a blocked artery — our large, vital running community got a collective stitch:  that sharp pain beneath the ribs, the stab that constrains the breath, that slows the footfall.  What stopped his heart broke ours. The shock was palpable.

A dedicated volunteer who donated countless hours and bottomless enthusiasm to Pikes Peak Road Runners, Mike had inspired many of us.  A serious runner with a bountiful sense of play, he enlivened everything he touched. Smart; funny.

I met him years ago, a lean, handsome guy who could have blown by lesser runners without a second look, but always offered a winning smile and encouraging words. I first saw him during a training run that involved long hill repeats up a winding road that marked the turnaround in an upcoming trail race.

I was 50 then, and managing about two repeats to every four cranked out by the younger runners.  Me slogging up, Mike flying down.  Catching my eye, offering that smile and encouragement: You’re looking great!  Keep it up!

I am nearly 60 now, coming off a year of inactivity after developing tendonosis in my left foot.  The injury — initially misdiagnosed and later unresponsive to physical therapy – was the wall I had dreaded hitting, the barrier I could not run through.  So I hung it up last fall, after 30 years as a runner, substituting desultory bike rides and elliptical workouts. And was not the same, was not myself.

But I’ve lived long enough to know that bodies are unpredictable.  So I decided a couple months ago to lace on the shoes and head to the track,  a semisoft, regular surface that would allow me to test my foot – and the rest of my aging body – in a controlled manner.

Just a mile that first day, a slow, steady mile during which I kept listening for my foot to complain, and heard nothing.  My hamstrings gave me grief, but they were just out of practice; they’d forgotten how it felt to run.  Yet the rest of me remembered, and in the cemetery on the way home,  I stopped to share with Mike.  Remembering him, too; remembering his goodness.

“A mile, Mike,” I said.  “Not much.  But something.”  And I could almost feel him beside me,  happy for me. Marking the moment; understanding what it meant.

I’m building slowly, slowly. Yesterday, I ran a mile warm-up on the track, then stepped gingerly onto the trail, testing my foot against its rocky, irregular surface, stepping carefully to avoid twisting an ankle.   A mile and a half out and back along that hilly path,  then home through the cemetery, jogging first to Mike’s grave, to say again that he’s missed, to tell again how it went.

And I thought of him standing there,  glad for me, glad with me.  Thought of that strong runner’s body, full of life;  that winning smile.  And heard his voice echoing across a distance that might be infinite,  or nothing at all:  You’re looking great!  Keep it up! 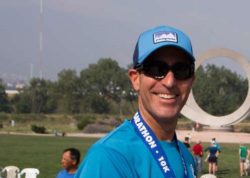 Stephanie Wurtz, an elite runner and Mike’s wife, told Runner’s World last March how running — their shared passion — has helped her cope with his death. You can read her story here.

← Carnegie’s paradox
For the bear who broke my fence →