A lineage of place

To Mark and Oliver, who moved, and to Molly, who died. To the young woman who traded her name for a husband, and honeymooned here.  To Ruth, who brought her losses, and let them float away in warm and gentle water:   May you be well. 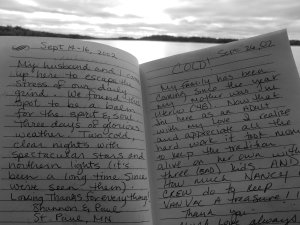 Each had written in the worn journal left on the hearth of Cabin 11,  a rustic rock and log refuge with cold running water,  a warm, welcoming wood stove and a peaceful geography, so close to the lake that no shore — only that shimmering surface — could be seen from the porch.

I was recently there — in northern Minnesota, just south of the Boundary Waters Canoe Area Wilderness — with my best friend. I’d visited the primitive camp before, though the last time was 25 years earlier. For more than a century, its woods-and-water cabins have welcomed people weary of their harried, workaday lives.   Modern amenities — hot water, toilets and showers — are shared, and cell and WiFi service is spotty.

It was perfect for me and Chele,  an outdoorswoman who worked for a nearby Outward Bound school for 20 years.  While she connected and canoed with old friends in those familiar waters, I walked the woods, sat by the lake and read the stories of those who had come before to Cabin 11.

Some were prosaic, reporting the weather, cursing the black flies,  suggesting the best bait to entice walleye and pike.  Many felt their hearts rise and fall with the wild, lonesome call of loons — we saw several, heard more — or the soaring flight of bald eagles, three of whom greeted me early one day, calling to one another as they banked over the lake, white heads gleaming in the sun.

One man wrote that he’d lost himself, but found God here, in Cabin 11.  In 2002, a young bride from Mississippi  — her looping handwriting suggested an almost painful innocence — wrote adoringly of her husband;  he had grown up in the area, she said, so there was no question where they would honeymoon. She reported how many fish he caught; she imagined them growing old together.  Her identity apart from him was invisible, even in her signature:  Mrs. Paul McCloud.

Some of the journalers came every year, and every year shared the pleasures and sorrows of their evolving lives, their delight in again returning to the cabin, their sadness at again leaving.  Mark and Oliver first appeared in 2004 with Molly, who might have been a puppy then. Mark wrote every year; like several others, Oliver contributed drawings.  Molly’s delight in exploring the camp was shared and recorded by each. 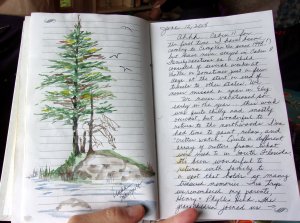 I noted the progression of their lives through the entries:  one year, Oliver absent due to a family emergency; another, due to a health crisis.  They grew older together, the two men and their dog.  In 2015, they brought Molly’s ashes and their sadness,  Oliver mourning the absence of “my best companion.”  And in 2016 — their last entry — Mark spoke of an impending move to Oliver’s native Columbia.

Ruth and David also came to Cabin 11 repeatedly,  and found particular solace in their 2003 visit:

“The water is so warm this year that we could spend an hour at a time suspended from foam ‘noodles’ visiting with fellow campers in the water — philosophizing, telling jokes, and being amazed how happy we were to be together — time suspended, our bodies suspended, the weights of the world that each of us carry for these moments left somewhere on the shore,”  Ruth wrote. “This past year has been a difficult one for us — friends and family have become ill, some have died. We came with our sadness, our losses, our fatigue of daily life at jobs, at living in a city that has grown too quickly.” 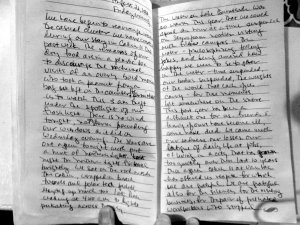 The entries were testaments,  a witnessing to that moment in their singular lives, offered with extraordinary openness to the care of some future stranger.  One of whom turned out to be me, feeling their joys and sorrows filtered through their brief days at Cabin 11 — the asynchronous, temporary home we shared — and bookended by the long, ordinary arc of our separate lives.

I found myself wondering where Ruth and David are now, if the 15 years since her 2003 entry have been kinder.  I hoped so.  I grieved with Mark and Oliver over Molly;  I hoped Oliver had regained his health.  I wished them happiness in Columbia.  I wondered, too,  if Mrs. Paul had recovered her name and her identity over the last 16 years, and hoped it had not cost her marriage. I wanted the man who lost himself to still have God.

Not long after I began reading the journal,  I sat on a large rock beside the lake,  warming in the early autumn sun and waiting for Chele to return from canoeing to grill dinner over the fire pit.  I heard a sound nearby, and looked up to see a slender red fox with black-stockinged legs and a grand plumed tail.  Small and silky, with a sharp muzzle, he was sweetly inquisitive, just as described in a journal entry from the week before our arrival.  I kept still and he came down,  pausing and then passing through the three-foot space between me and the cabin.

I couldn’t help but think, then, of Antoine de Saint-Exupéry’s The Little Prince,  in which the titular character forms a tender friendship with a little fox, who offers this counsel:  “It is only with the heart that one can see rightly;  what is essential is invisible to the eye.”  I added it to my entry in Cabin 11’s journal.

It was hard, two days later,  to leave the visible and audible beauty of our rustic camp:  the vast and ever-changing expanse of water, the fecundity of the north woods — the wild things that live there, from small, velvety shrews to black bear and moose.  The calls of loons, and of eagles.  The wild percussion of a thunderstorm that pummeled the lake one night;  the fierce brilliance of the lightning that branded the sky. Darkness unspoiled by artificial light, the Milky Way cast like a blanket across endless space,  an infinity of stars twinkling.

But it was hard, too, to leave what I had not seen nor heard, but felt on the pages of the worn journal propped on the hearth of Cabin 11:  an out-of-time communion of souls,  the lineage of place I now share with them; the wishing them well. 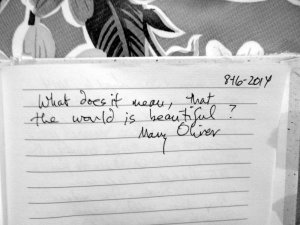