I recently heard a story on National Public Radio about an effort to preserve the music of Shakers, a Christian sect founded in England in the 18th century. There’s a certain urgency to the project, because there are only three — yes, three — remaining Shakers in the United States. They farm in the last Shaker village, Sabbathday Lake, in rural Maine.

Shakers eschew marriage and sex, which compels the snarky part of me to point out the importance of planning. (Founding a Sect 101: Step 1. Create dogma.  Step 2. Choose a propagation plan. Options, in order of descending effectiveness: procreate, proselytize, hope for immaculate conception, or, for sects in which self-apocalypse is part of the dogma – see Step 1 – mass suicide. )

Mostly, though, I’m sad, because there is something lovely in the humble, nature-appreciating Shakers, who, after splitting from the Quakers,  were nicknamed for the physicality of their worship. Shakers believe God is both female and male, and hold both sexes in equal esteem.  In addition to a celibate and communal lifestyle, the sect practices pacifism, prayer and meaningful work. In broader American culture, Shakers are associated with non-materialism — not only with simple living, but the simplicity of their architecture and furniture. 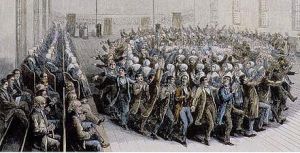 Engraving of Shakers dancing, circa 1840.

But music is also an important part of their faith; many Shakers wrote songs, which were sung together as a form of unity in worship. According to NPR,  10,000 Shaker songs are stored in the Sabbathday Village library.

The best known is Simple Gifts by Elder Joseph Brackett, which dates back to 1848.  Two minutes of beauty for your day, here performed by Yo-Yo Ma and Alison Krause:

Though Brother Arnold Hadd, 58, may be around for awhile, he will soon be the last of his kind in this country:  Sister June Carpenter is 77;  Sister Frances Carr is 89. They’ll leave a legacy of simple but profound gifts:  of lives lived in peace and by principle; of modest and mindful existence in an age of gross materialism; of reverence for the beauty and fragility of the natural world,  eclipsed in the modern mind by affinity with a coarser, virtual reality.

A prayer for them, then — for the last of the Shakers as they leave our world: May you find yourselves in the place just right; may you be in the valley of love and delight.

← Monstrous
From my cat, I catch contentment →