Her last moment in breathable air might have been a shudder, or a howl.  A bearing down, a thrusting up. The snow driven like bullets by fierce wind, the fresh and frigid water ripped and roiled into 30-foot waves and worse, especially the last two: Monsters. Rogues. And then the great arc of tension — the unknowing — broken, the question answered, the moment surrendered.    Plunging, then, disappearing from one world into another.  Breathless. Quiet.  Dark.

The Edmund Fitzgerald went down off Whitefish Point, Michigan in storm-tossed Lake Superior 42 years ago today, undone by a combination of natural and manmade factors that defy conclusion.

The loss of the huge iron ore freighter and her 29-man crew was hardly the greatest casualty of November gales for which the Great Lakes are notorious:  Nineteen ships were destroyed and more than 250 lives lost during a six-day period in November 1913. Sixty-six people died and five vessels were destroyed during a Nov. 11, 1940 storm.  But a year after she sank 17 miles from the safety of Whitefish Bay,  the Fitzgerald was figuratively raised by singer/songwriter Gordon Lightfoot, whose hit ballad secured her place in our collective memory. 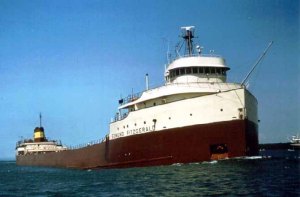 The song’s rolling melody and lyrics — alternately clunky and evocative — capture the mythic quality of the Fitzgerald, sometimes dubbed the Titanic of the Great Lakes. At the time of her 1958 launching, she was the largest freighter traveling the lakes — 729 feet, prow to stern — and considered invincible.

Like that of the Titanic, her sinking might be read as a cautionary tale about the particular arrogance and forgetfulness of our species:  However special we fancy ourselves, humans and their inventions remain subject to Nature, in all its magnificence and ferocity.

But the power of the Fitzgerald’s demise is more personal than philosophical;  our imaginations are drawn to the harrowing final experience of those 29 men —  fathers and sons and brothers. The youngest was watchman Karl Peckol, 20, the oldest Captain Ernest McSorley, 63, a respected mariner who had sailed the Great Lakes and oceans for more than 40 years.

Late on the afternoon of Nov. 10, 1975,  McSorley radioed a nearby freighter, the Arthur M. Anderson, that the seas were among the worst he had ever seen.  As the storm intensified, it took out both radar systems on the Fitzgerald; the ship developed a list and began taking on water,  though bilge pumps were running continuously.

McSorley’s  last known words were received shortly after 7 p.m.:  “We are holding our own.”  Minutes later — at about the time the Fitzgerald would have been hit by  rogue waves that had earlier threatened the Anderson —  the ship vanished from the Anderson’s radar, having never issued a distress signal.  The bodies of her crew — all but one, discovered years later on the lake floor near the Fitzgerald’s bow — are thought to be entombed within the freighter, which broke into two pieces now lying 535 feet below the lake’s surface.

The brief, unknowable drama between those two facts — McSorley’s last known words, the crew’s bodies —  crystallizes the mystery that shadows our lives:  When will death come?  How?

We each hope for peace in the end, but also in the getting there. We hope to be unafraid,  to feel not alone;  we know we don’t always get what we hope.  The most poignant of Lightfoot’s lyrics imagines the loneliness of those last minutes,  gone elastic on the way to eternity:

Does any one know where the love of God goes
When the waves turn the minutes to hours?

Surely, it must have felt that way:  Hurricane-force winds, blinding snow, the once-sure vessel bucking and listing, mountainous waves bearing down.  A shudder, a howl.  Fear.

But then it is over, and quickly.  Not the slow attenuation of illness for these men, nor the gradual erosion of age. Rather, the question emphatically answered, the moment fully surrendered.

And,  we hope — for the crew of the Edmund Fitzgerald on this anniversary, and for each of us in our own time and manner — peace, on the other side of that mystery.  Peace.

← One shot
My inner Sally Field →