The ancient doorknob on my outside basement door failed the other day, just as I was settling into my evening routine of watching brain-numbing television while my cats — who are expert in gestures that seem to express affection but actually cause scars, sort of like a psychotic ex  — knead my lap with their needle-sharp claws.

Dammit.  But there was nothing to do but hie me to Home Depot for a replacement knob, which I did with only a mild amount of kvetching because my mother was visiting and I wanted to appear like a responsible adult, though we both know better. 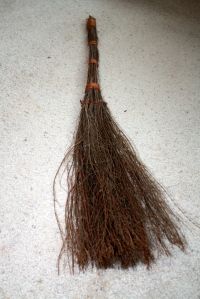 After fussing over the bazillion doorknobs at Homey’s and eventually selecting the cheapest —  er,  best — I discovered in the Impulse Purchase Area a cinnamon broom.  In addition to the $5.98 price tag,  it was appealing in a rustic way, but only absurdly, because I am pretty sure people in the olden days used cinnamon for baking and brooms for cleaning, and that the only way they got together is if you goofed up pretty bad.  But I nonetheless bought it because my home is absurdly rustic, too,  and, you know: $5.98.

And then, as I was driving home, the sun was setting in that glorious way it does if you’re lucky enough to be in just the right place at just the right moment, and what had started out as an annoying errand was beginning to feel pretty good — and to smell that way, too, given the broom riding in the passenger seat.

But then, things got even better, because of the goats.

There they were — hundreds of them, all colors and sizes — finishing up a hard day’s work of munching weeds at Bear Creek Park, which I passed on my way home.

I had seen them before, but not for some time; they’re here for little more than a week once a year. A traveling herd of cashmeres from southwest Colorado, the goats are hired out by their keepers to provide natural weed control.   At Bear Creek, they graze by day near the community garden plots, where they are fenced by night,  fertilizing the soil with poo and pee worked into the soil by their cloven hooves.

But the goats are also huge crowd-pleasers.  I was back early the next morning, Mom in tow, to watch the rowdy ruminants before the herders turned them out: Goats napping and nibbling. Goats farting and baa-ing. Goats head-butting and climbing into trees.  We were enchanted.

Then the owners opened the gate, and they were off at a gallop:

So, that’s life for you:   You feel all put upon by some tiny problem, and the next thing you know, you’re given a sweet-smelling broom, a gorgeous sunset and — who’d have believed it? — goats.  Goats!

And you know what else? The doorknob works.

← One shot
The quick and the dead →