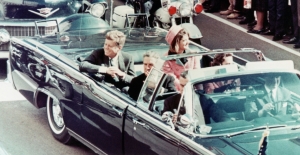 I recently completed William Manchester’s The Death of a President, an exhaustively researched description of the days surrounding John F. Kennedy’s brutal assassination in Dallas on Nov. 22, 1963. The slaying of the charismatic president, who embodied the vigor and optimism of a new generation, shattered not only his countrymen but citizens of the world.

Perhaps it’s the emotional weight of revisiting in detail such an excruciating time in human history,  but I can’t help but feel those days reflected darkly in the actions of our new president, who seems bent on assassination of a symbolic but equally far-reaching kind:  that of the fundamental American character.

Manchester’s description of  JFK’s state funeral is heartbreaking:  the long procession of foreign dignitaries — more than 200, from 92 nations powerful and insubstantial, large and tiny, dressed in formal attire or military uniform — walking to a muffled drumbeat down Pennsylvania Avenue behind the widow, the president’s brothers and the caisson that bore his body.

The shock and grief of their own countrymen — la profonde douleur de mon pays (the deep sorrow of my people), as French President Charles de Gaulle put it — compelled their attendance. Many wept openly.  They were undone not only by the young president’s murder but the courage and dignity of 34-year-old Jacqueline Bouvier Kennedy, who three days earlier had cradled his shattered head in her lap as the life bled out of him. 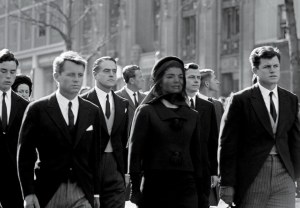 Lady Jeanne Campbell, a reporter for the London Evening Standard, cabled the newspaper that the widow had “given the American people from this day on the one thing they always lacked — majesty.”

…When he shall die,
Take him and cut him out in little stars,
And he will make the face of heaven so fine
That all the world will be in love with night
And pay no worship to the garish sun

The manner of JFK’s death makes difficult a purely objective assessment of his presidency: “Once a leader becomes a martyr,” Manchester writes, “myth naturally follows.”

“Love is very penetrating,” observed Spanish philosopher George Santayana,”but it penetrates to possibilities, rather than to facts.”

Still,  it’s impossible to remain untouched by Manchester’s book, which captures in its depiction of lost potential the zenith of American idealism, a nation aligned in policy and action with its noblest founding principles.

“… If we cannot end now our differences, at least we can help make the world safe for diversity,” Kennedy said in his 1963 American University commencement speech. “For, in the final analysis, our most basic common link is that we all inhabit this planet. We all breathe the same air. We all cherish our children’s future. And we are all mortal … We shall do our part to build a world of peace where the weak are safe and the strong are just.” 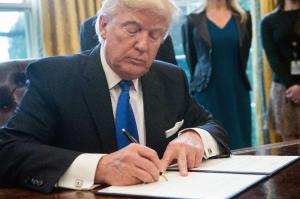 It’s a long, steep fall from such inspiring sentiments to the reality of Donald Trump, whose first fortnight in office was marked by a brutally discriminate use of executive privilege that disregards Constitutional values and targets some of the world’s most vulnerable citizens, as well as our increasingly fragile environment.

We who populate a nation founded by immigrants hoping to escape religious persecution are learning that not all murders require a weapon. With repeated strokes of his pen, Trump — a man who cannot be traduced for the simple reason that his amorality is a matter of public record — has begun assassinating the American character. With stunning celerity, he has codified the “us vs. them” mentality that typified his campaign, elevated tedious self-absorption into unconscionable public policy, abandoned traditional promises and principles and shamed those of us who hope still for a nation worthy of Kennedy-era optimism. He deals with dissenters — another American convention  — in the manner of all despots, replacing them with sycophants.

JFK’s assassination more than a half-century ago was a grievous loss to our nation as well as the world, yet on its heels came a renewed determination to secure and expand his vision. Lyndon Johnson’s administration saw not only the passage of the Civil Rights and Voting Rights acts, but the advent of Medicare, Medicaid,  and other social programs that sought to keep the weak safe and the strong just, in addition to progressive environmental legislation.

We face now another form of assassination, one that assaults the national conscience, burdens our spirits and threatens to alienate long-time allies. Who, I wonder, can restore our majesty now? And how, confronted with the troubling alternative facts of a Trump presidency, can we preserve and embolden a love that penetrates to the possibilities we yet hold dear? So many years and battles later, do we have the resilience and faith to again answer the call of another president, one who embodied the shining best of the American character, rather than its dark underbelly?

On the cold January day of his 1961 inauguration, Jack Kennedy called on a new generation of Americans  “unwilling to witness or permit the slow undoing of those human rights to which this nation has always been committed.”

American history is nothing if not instructive.  And so we rise again to that long twilight struggle, knowing that our work —  our protest, our dissent, born of love for this great country — will not be done in the first hundred days of the Trump presidency, nor in the first thousand, nor in the life of that administration, nor even perhaps in our own lifetimes. But let us begin.