The patron saint of doubt

“If I ever become a saint, I will surely be one of ‘darkness.’ I will continually be absent from heaven, to (light) the light of those in darkness on earth.” — Mother Teresa, 1962

Mother Teresa’s recent canonization is cause for reflection, not because of her religious good works, but because of her dark night of the soul, which stretched over half a century.

I’m not remotely Catholic, and some of the tiny Albanian nun’s dogmatic viewpoints, methods and associations created controversy even among the Church faithful. Still, no one denies the sincerity and sacrifice that characterized her service to the destitute.

Yet, those are conventional credentials — along with a couple of miracles — for elevation to sainthood. What isn’t conventional is Teresa’s painful, enduring doubts about the presence of God in her life, a suffering made palpable in hundreds of personal letters to spiritual advisers. She never intended they be published and in fact had asked that they be destroyed, according to a 2007 Christianity Today article. 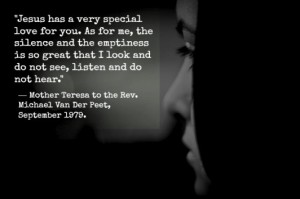 That they were not — that the spiritual desolation of the outwardly joyous nun was made public — elevates the usual narrative of saintly piety and selfless devotion to a more complex and relatable story of loneliness, suffering and perseverance.

The isolation must have been perplexing as well as painful to Teresa, who went to Calcutta in 1946 after what she described as several mystical encounters with Jesus, in which he directed her to serve the poorest of the poor. But her sense of his presence evaporated soon after she arrived; for the rest of her life, she felt acutely the absence of the God she had pledged to serve.

“Darkness is such that I really do not see—neither with my mind nor with my reason. The place of God in my soul is blank,” she wrote. “There is no God in me. When the pain of longing is so great — I just long and long for God — the torture and pain I can’t explain.”

Christ in the Garden of Gethsemane, Paolo Veronese

Doubt has a time-honored place  in  many spiritual traditions, where it functions as a kind of acid test, a suffering that calls into question not only the seeker’s fortitude, but sense of purpose.

Christ knew doubt and fear in the  Garden of Gesthemane, during the agonizing hours leading up to his crucifixion.  “My soul is deeply grieved, to the point of death,” he told his disciples. “Remain here and keep watch with me.” And then, praying alone while his feckless followers slept:  “My Father, if it is possible, let this cup pass from me.”  An angel helped Christ through that tortuous night.

Some five centuries earlier, Siddhartha Gautama — under siege from Mara, the Lord of Darkness in Buddhist cosmology — needed help, too, summoning the earth itself to witness for him when Mara presented his final test, a challenge to the about-to-be enlightened Buddha’s fundamental worthiness.

Apparently, there was no such moment for the woman who became  Mother — and now Saint — Teresa,  who decided at the tender age of 12 to devote herself to religious life.  Unlike Thomas, the traditional Catholic patron saint of doubt to whom Christ displayed his crucifixion wounds as proof of resurrection, or Gideon, who secured God’s reassurance by laying out a fleece, Teresa persevered– year after year after year — in the echo of God’s silence.

In that act of enduring courage, she is a saint for all who struggle, and question, and long for some redeeming certainty: a human being who wanted to be good, and to do good.  A woman who gave herself fully to the call of her spirit, keeping the faith despite her doubt — casting a light for others, from the dark night of her own soul.