If you’ve been paying any attention to the news lately, you’ve probably heard about an Hungarian study that indicates dogs understand human language in a much more sophisticated manner than previously thought. 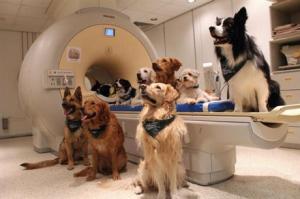 The study exposed 13 dogs to recordings of their owners’ voices in both appreciative and neutral tones while observing their brains with a functional MRI. Some of the phrases were meaningful — szép munka! (well done!), for example — while others were meaningless. (These were taken from Donald Trump’s varying speeches on immigration policy.) It turns out dogs register not only intonation, but meaning: they recognized praise only when praise words were matched with an appreciative tone.

To which my cats say, in a neutral tone: Nagy ügy. A kutyák alázatos és méltatlan. (Big deal. Dogs are obsequious and undignified.)

Which the researchers kind of conceded. In an e-mail to the Associated Press, study lead Attila Andics, a neuroscientist at Eotvos Lorand University in Budapest, observed that less servile species probably have an ability similar to dogs’ to understand what we say, but simply aren’t interested.

To demonstrate, I recruited my cat Spot to listen to a meaningful phrase, first spoken appreciatively, then neutrally, followed by a meaningless phrase, in the same tonal sequence:

Case closed, though I have noticed that cats respond powerfully to one human-generated sound:

← Monstrous
The patron saint of doubt →