I have recently been on a classics kick of sorts, exploring books I have long heard referenced but never read. Having considered Viktor Frankl’s Man’s Search for Meaning, which contemplates the purpose of our individual lives, I am now immersed in a book that tackles an even more perplexing question: How the heck can we get along with each other? 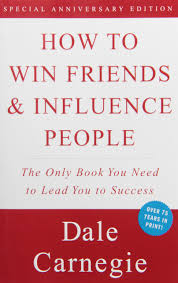 Enter Dale Carnegie and How to Win Friends and Influence People, which remains as astute – and discomfiting — as it was when first published 80 years ago. Astute, because Carnegie nails the fundamental human need to feel important. Discomfiting, because he then unabashedly explains how to exploit that need to further our own ends.

Maybe it was the precipitous drop from the lofty existential heights of Frankl’s work, but Carnegie’s unflattering characterizations of human nature initially made me squirm.  To wit:

Too harsh?  Maybe.  Too broad, at least.  Some people are devoid of empathy and thus accountability; they truly care only for themselves. We call them narcissists.  Many fewer are selfless,  not from a penchant for martyrdom — a perverted form of ego gratification — but because they are that spiritually evolved. We call them saints.   Most of us fall in the vast in-between.

But Carnegie’s overarching point is well-taken. People desperately need to feel important, he says – if not in the calculus of the world at large, at least in the smaller circle of the people around them. He quotes philosopher and psychologist William James: “The deepest principle in human nature is the craving to be appreciated.”

Not simply a desire or a need, Carnegie emphasizes – a craving.

“Here is a gnawing and unfaltering human hunger,” he writes, “and the rare individual who honestly satisfies this heart hunger will hold people in the palm of his or her hand.”

Can we really be that small? That self-absorbed, that ego-driven? When it’s all said and done, are we primarily motivated by the need to feel that we matter, and attached to other people on the basis of how well they fulfill that need?

I didn’t want it to be true. And then I looked at the one Christmas card still on my coffee table. It is not from a family member, nor a friend; those are long gone. It is from my co-worker Suzy. “You are such a brightly shining light in my workday,” she wrote. “You make my heart smile with your hugs.”

That card meant a lot to me – an almost embarrassing lot. And feeling the warmth of Suzy’s gratitude wash over me again, I had to cede Carnegie’s assertion: feeling seen and appreciated matters a great deal.

I am left, then, to wrangle with the rest of the equation: Carnegie’s implicit assertion that it is fine to leverage this vulnerability to our own ends, and his simple, explicit techniques for doing so.

It all seems too calculating, too tactical. Carnegie was a salesman, after all, and businessmen were his prime audience, though the book has since found a much broader readership. Repeatedly, he skirts the edge of behaviors most of us find repugnant — empty flattery, for instance — only to step back and clarify. We should not flatter, he says, but rather express sincerely felt appreciation.  We should not approach others solely to get what we want; rather, we should carefully discern their interests and find ways to satisfy their wants as well as our own. “Both parties,” Carnegie says, “should gain from the negotiation.”

That’s a reasonable moral standard — one we routinely fail to meet in our self-absorption. Sometimes,  we ask other people directly for what we want. More often, we proceed indirectly and often unconsciously, through various forms of pressure and manipulation.  If we “win” in such instances, it’s a Pyrrhic victory, engendering resentment and mistrust. And neither avenue considers the other person.

Carnegie suggests that we instead bring some detachment, intelligence and intention to our seeking. The great virtue of his approach is that it requires us to step out of the World of Me at least long enough to consider the interests of others.  In that regard, it’s a paradox:  Once acknowledged, the fact that we are all self-interested can actually make us less so, causing us to consciously reflect on others’ needs – even if only to better meet our own.

Maybe that’s why Carnegie’s book and associated courses remain so popular, eight decades after How to Win Friends and Influence People first saw the light of day.  True, his view of humanity is not flattering. No surprise, there: Once again, we fall short of the angels. But his view is not cynical, either — just honest.  Carnegie calls a spade a spade.  And then shows us how,  shoulder to shoulder, we might better dig.