Wrestling with the angels 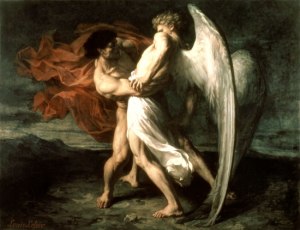 I have a secretly epic personality, partial to big ideas and overarching narratives. Being writerly, I am also fond of metaphor, and thus fell in love long ago with the Old Testament story of Jacob wrestling with the angel. Let’s overlook the part where Jacob has two wives, two female “servants” and 11 sons, and pick up the action in Genesis 32:24, here recounted in the New International Version:

So Jacob was left alone, and a man wrestled with him till daybreak. When the man saw that he could not overpower him, he touched the socket of Jacob’s hip so that his hip was wrenched as he wrestled with the man. Then the man said, “Let me go, for it is daybreak.” But Jacob replied, “I will not let you go unless you bless me. … Then the man said, “Your name will no longer be Jacob, but Israel, because you have struggled with God and with humans and have overcome.”

It’s a universally appealing message — that if we persevere with courage, we will ultimately be blessed by our struggles. But it’s easy, over time, to get lost.  The inner weather turns murky; the clarity and urgency of the work recedes, and a sense of purpose goes with it. We forget how to suffer in a way that matters.

This sometimes happens to me, and maybe to you, too.  And when it does, what once seemed like meaningful spiritual warfare begins to feel more like mud wrestling.  I was considering this recently, in the form of a conversation.

Angel: Me, too. We’ve been at this a long time.

Me: True. You’re dirty,  and your wings are tattered; you’re supposed to be all glossy and magnificent.  Wait … are you molting?

Angel: Very funny.  And you should talk. What’s with the wrinkles and sagging skin? You are so not making the cover of Sexy Warrior Weekly.

Me (sighing):  Do you even still have my blessing?

Angel (blankly): Your what?

It turns out that, while I am a prodigious sufferer, I am not an accomplished one.  This has become clear to me while reading Viktor Frankl’s Man’s Search for Meaning,  in which the Viennese psychologist recounts his experience in Nazi death camps. I was curious about the book in its entirety, as I have heard it quoted many times. To wit:

Between stimulus and response there is a space. In that space is our power to choose our response. In our response lies our growth and our freedom.

When we are no longer able to change a situation – we are challenged to change ourselves.

Frankl’s tome is part memoir and part explication; the last third explains his core psychological doctrine. While Freud believed that humans are primarily pleasure-seeking creatures, Frankl’s logotherapy holds that we are driven by the search for meaning. He posits three main areas in which we may locate it: creative work, love of some thing or person, and suffering.

Frankl became an involuntary expert in the last area during his time in four concentration camps,  where his pregnant wife, parents and brother perished.  The experience obliterated the possibility of creative work or love;  suffering was all that remained.   It was suffering of a kind few of us can imagine, and the vast majority of prisoners succumbed the way most of us would: They despaired; they gave up.

“Woe to him who saw no more sense in his life, no aim,  no purpose and therefore no point in carrying on.  He was soon lost, ”  Frankl writes. “The typical reply with which such a man rejected all encouraging arguments was, ‘I have nothing to expect from life anymore.’  What sort of answer can one give to that?”

And then he provides it:

“We had to learn ourselves and, furthermore, we had to teach the despairing men, that it did not matter what we expected from life, but rather what life expected from us.”

Now, we in the United States are fond of talking about our rights — everything to which we are entitled, beginning with life, liberty and the pursuit of happiness enshrined in the Declaration of Independence. Depending on the claimant, the list grows from there: we have a right to love,  to a career that makes us happy.  To health, wealth, and other forms of prosperity.

Life owes us.  And when it doesn’t ante up,  we complain.  If it continues to disappoint, we fall into a dysthymic funk. And if  takes something dear from us,  we are prone to despair.

I don’t mean to diminish the difficulty of adversity;  life is rife with suffering, and we are sometimes visited by losses that seem unbearable. They leave as feeling emotionally incarcerated:  left in the manner of all prisoners, with nothing but our suffering.

But this is where it gets interesting — if only we can get clear enough of the muck to see it.

“Ultimately, man should not ask what the meaning of his life is, but rather he must recognize that it is he who is asked,” Frankl writes. “Each man is questioned by life, and he can only answer to life by answering for his own life.  To life he can only respond by being responsible. …

“When a man finds that it is his destiny to suffer, he will have to accept his suffering as his task,  his single and unique task. His unique opportunity lies in the way in which he bears his burden.”

The way in which we bear our burdens.

Frankl is talking about present, conscious, engaged suffering that calls forth and enlarges qualities of the spirit we most value:  Wisdom.  Courage. Compassion.  He is talking about a response to hardship — a responsibility to life — that ultimately ennobles rather than degrades.

Frankl says he often thought in the concentration camps of a quote from Dostoevsky: There is only one thing that I dread: not to be worthy of my sufferings.

In suffering, Frankl writes, “lies the chance for man either to make use of or to forgo the opportunities of attaining the moral values that a difficult situation may afford him. And this decides whether he is worthy of his sufferings or not.”

It’s a tall order, as even Frankl acknowledged.  Still, if we can embrace the invitation embodied by suffering — the call to answer bravely for our own lives — we may yet be raised from the mud. And wrestle, fully worthy, with the angels.