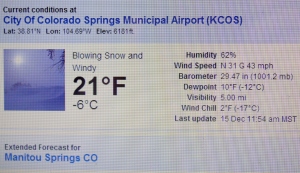 It’s cold, finally, along Colorado’s Front Range. Tonight’s predicted low is 7 degrees. And though yesterday’s high was around 20, a mercurial gale blew sharp crystals of new snow hither and thither, pushing the wind chill toward zero. Local school districts were shuttered, and offices encouraged employees to work from home.

To which I,  a nearly native Minnesotan and slow learner who recently survived eight rural winters in Michigan’s Upper Peninsula, could only say:  Waaaa. Ya big babies. 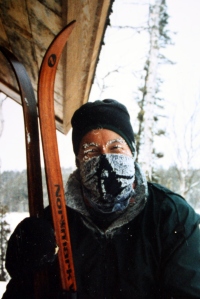 I’ve earned the right to that response, as evidenced by the adjacent portrait, taken 22 years ago.

It was 20 below zero on that January day in northern Minnesota; when the boreal wind blew, the mercury dipped to minus 40, then minus 60. We’d left our warm Twin Cities apartment to spend the coldest weekend in memory skiing out of a friend’s cabin along the Gunflint Trail near Grand Marais. It was a remote cathedral of knotty pine and rough-hewn beams, with unfinished walls and a stout old wood stove, the only source of heat.

We worked that stove every waking minute, yet never got the cabin warm enough to melt the ice crystals on the framing nails. At night, we huddled beneath an electric blanket in the loft, fortified by long johns, wool socks and a pale pocket of warm air. We kept the boots and parkas near, where we could climb into them each morning before descending the ladder to coax the embers back to life.

Minnesotans love such stories. They have a hearty Nanook of the North quality that showcases our devil-may-care toughness while pretending to cast Nature in the starring role.

So it was that Northlanders transplanted to Colorado’s fairer climes — and we are legion — participated in a group scoff when local meteorologists declared this week’s single-digit wind chills “bitter.”

Not that it isn’t a bit nippy. The neighbor’s house, which I can usually see, looked like this yesterday:

My hens, cooped up for their own protection, are moping around,  their cabin fever broken only by periodic deliveries of the treat pan.

The wild birds have bigger worries; the razor wind cleaved the insulating breast feathers of this little Oregon junco yesterday as it approached a feeder.

Even my stalwart little Forester is groaning when I turn the key in the ignition.

But getting home from that weekend in the cold white North?  Why, we had to slide a glowing coal scuttle beneath the engine block to conjure the smallest sign of automotive life, so deep was our car’s cryogenic coma. And an hour into the drive, with the defroster running full bore, we were still scraping ice off the inside windshield.

There’s danger in true cold, the threat of frostbite and worse — that silky, seductive sleep from which we may never awaken, “every cell’s core of heat pulsed out of us into the thin air,” as the poet Adrienne Rich wrote of a women’s climbing team that died on Lenin Peak.

Cold can turn the sturdiest among us out of the mortal coil in chillingly short order. And while freezing may, in the end, be a pleasant death, the tissue-tearing ache of getting there — and warming again to life, if one is so lucky — is a profoundly organic misery.

Yet there’s something refreshing about the cold, an elemental honesty. Sizzling heat invites lassitude and torpor, but a hard chill freezes out complacency. It requires us to work to stay alive, though for most of us most of the time, that work is nothing more than turning up the thermostat or throwing another log on the fire.

Still, cold reminds us that – like it or not, and despite our insulating conveniences – we are subject to Nature, with all her dangers and beauties.  And those beauties are considerable: Cold lends clarity to the landscape, sharpness to the senses. The blue of the sky deepens; the polar snow glitters in the brittle sun and crunches like potato chips beneath booted feet. The air itself seems alive.

It’s worth venturing outside, if only for a few minutes, to experience that wildness, to feel the fragility of human skin against the sharp bite of this harsh and beautiful world. Worth it, to be cold.