Among the many oddities that populate the universe of Internet streaming is a channel that offers a wide selection of cautionary films — those short, pithy movies intended primarily to build character in young Americans and instruct them in vital matters, ranging from dating to surviving an atomic attack (experiences that in some instances require a common skill set).

Most originated during the Cold War, and exist today as cultural curiosities, appalling in some regards, laughable in others. I spun through a dozen or so last night, and along the way learned that one can not only survive a nuclear bomb by ducking and covering beneath a school desk, but that radioactivity can be washed off clothing with simple household soap. What a relief!

Yet, I feel a sort of wistfulness about the earnestness of these films,  their presumption that character is important, and that young people should — sooner rather than later —  develop it by taking on responsibility.  A generation of Teds and Suzys learned that they had a job to do during a nuclear attack, for their own good and as part of a communal response:

The same quaint “Be Prepared” notion of early responsibility for self and toward others — albeit, in less apocalyptic circumstances — permeates the 1953 edition of the Girl Scout Handbook, a gift from a friend who shares my appreciation for cultural kitsch and artifacts. 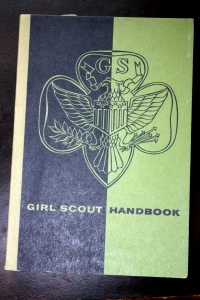 In thumbing through the drab-looking volume, I was struck by the rigorous criteria for earning proficiency badges.  For instance, a Scout who wanted to earn a health aid badge had to demonstrate first aid for fainting, cuts, and blisters. To earn a foot traveler badge, she had to take a series of walks totaling 100 miles, including taking charge of an all-day group hike.  I’ve been keeping hens for nearly 15 years,  but I’m not sure I’ve yet fulfilled the requirements for the poultry-raiser badge.

Two generations hence, we give youngsters participation ribbons — awards — for simply showing up.  Children who absorb that unalloyed message grow into the kind of young adults I taught at a Michigan university, students who asked me if I gave “attendance quizzes.”

I looked at them blankly.  Points, they explained, for coming to class.  I would have laughed, but it was impossible with my jaw on the floor. Sure, I thought — and right after class, I’m going to suggest to my department chair that he pay me for standing in front of you, even if I don’t teach.

I don’t want to romanticize one extreme because of my distaste for the other, and I’m certainly not wishing back an era in which children had to fear nuclear annihilation.   Nor do I want to paint with too broad a brush.  During my years in academia, I also encountered young adults who didn’t expect something for nothing,  who understood they had a role to play and responsibilities to meet — to themselves and others — both during their education and after.

I find myself wishing for more of them and fewer of the other, and for a culture in which the development of character is still a core concern, rather than what it too often appears to be — an afterthought, or worse: an anachronism.