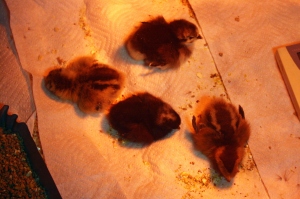 In the matter of babies, things are going well when the wee ones grow stronger and more capable daily, while their mother, eroded by sleeplessness and beset by a cavalcade of legitimate and fantastic worries, becomes increasingly bedraggled.

I passed half the night crumpled on a love seat near the brooder, alternately dozing and rousing myself sufficiently to confirm the rosy glow of the heat lamp beneath which my charges slept. Newly hatched chicks need the heat of their mother’s body — or a lamp — during their first weeks of life. An undetected burnt-out bulb would be disastrous.

I had spent the better part of the day fretting over my welsummer. The other three chicks looked fine.

Upon arrival, the Americana immediately began running about and scratching furiously; it was clear that she had appointed herself sheriff of Chicktown. The barred rock already displayed the poise, beauty and benevolence that will allow her, a few pounds down the road, to depose the smaller, less qualified sheriff. The black Australorp was sweet and focused. But the welsummer was droopy; after an initial exploration of the brooder with the other chicks, she mostly slept.

It had been a tough trip for all of them; through some mischief or mistake of the postal service, the chicks were two days in transit from the Missouri hatchery, rather than the expected one. The welsummer appears a little older than the others — she is already sprouting feathers on her wingtips — and during the trip might have exhausted the residual yolk on which chicks can survive for up to  three days after hatching. She seemed wobbly, too; perhaps her older legs were primed for exploring rather than sitting.

I pulled out the usual chick-boosting tricks — electrolytes and sugar in the water, crumbled hard-boiled egg yolk for a tasty first meal  — and, having done what I could for her, dealt with my remaining anxiety and helplessness in the manner of overwhelmed mothers from time immemorial: I drank.

By last evening, the welsummer was fine, caught up and cavorting with the rest of the chicks. Her apparent recovery allowed me to spend the night fretting over the heat lamp. Today, I plan to worry about pasting up, a common and potentially fatal condition of recently shipped chicks in which their tiny bums become clogged with poo.

In an introduction to a 1944 poultry primer, the marvelous essayist and chicken-keeper E.B. White — better known as the author of Charlotte’s Web — made this wonderfully astute observation:   “A hen is an alarmist, but she is not silly,”  he wrote. “She has a strong sense of disaster, but many of her fears seem to me well-founded.”

He might as well have been talking about me: I have a strong sense of disaster. That said, all seems well, at least for the moment. And, after yesterday’s intensive bonding, we seem succesfully imprinted — not just the chicks on me, but me on them: