In praise of weirdness

Last weekend, my little mountain town hosted its almost annual Great Fruitcake Toss, in which people gather to see who can throw a fruitcake the farthest, the fastest and most accurately. Folks were in a particularly celebratory mood, because the beloved toss had been canceled the previous year.

Founded in 1996 as an alternative, tongue-in-cheek use for the much maligned, rarely consumed Christmas confection, the Manitou Springs event had become a victim of its own popularity. Competitors fueled by cabin-feverish imaginations arrived with huge wooden catapults, cannons,  pneumatic guns and other out-sized propulsive devices that hurtled the brick-like cakes at a velocity and distance capable of injuring people and damaging property. The festival languished after being relocated from a small downtown park to a safer but less appealing site, and then disappeared.

But this year,  a scaled-back version returned to the original location, propulsive devices banned. Some people brought their own fruitcakes from Christmases past; most ponied up $1 to rent small loaves baked by volunteers. Fruitcake-themed music blared from loudspeakers:

Spectators gathered in loose, gregarious circles to chat and reminisce about past tosses.  Competitors sized each other up,  the fiercest battling for bragging rights in the distance event.   Some stretched to warm their muscles in the snow-flecked air; others worked thoughtfully on their grips.

And then, determination written on their faces, they let fly.

It was sweet, if not as memorable as the first event, in which a competitor won the distance division by tying his small fruitcake to a helium balloon;  spectators cheered for several long minutes as it floated out of sight, into the ether.   Nor was there a glamor competition at this year’s toss,  though an early winner was on prominent display, some 20 years later.

No matter.  The toss was back, and we were gladdened by the return of organized winter wackiness in a town that prides itself on weird.  In a couple of weeks, Manitou will celebrate Carnivale — our Mardi Gras — with a main-street parade full of color, costumes, puppets, beads and god knows what else.   Come October, we will race coffins down that same street in a festival that commemorates a young woman who died here of tuberculosis in 1891, but didn’t quite stay buried. Last August, a funky festival debuted with no other purpose than to celebrate our little town; it featured yoga, hikes,  street musicians and a blessing of the waters, in which friends and strangers held hands,  thanked the Earth Mother, did a spiral dance in the park, thought good thoughts and engaged in other forms of woo-woo.

Manitou has been like this for years  — gentle and funky and always a little Rocky Mountain high,  long before recreational pot became legal. We like it that way. 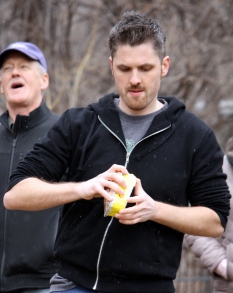 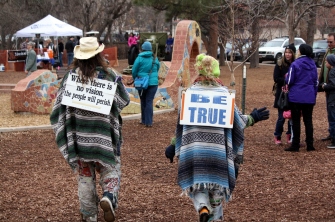 ← The plug
Spiders and other terrors →