Voices have always affected me organically, and as I get older, I find myself paying closer attention to nuances of timbre, pitch, resonance. Part of this aural focus may be a rebellion against the distinctly human bias for the visual, which has been grossly exacerbated by our  immersion in technology that relies on rapid-fire imagery. But attending to the richness of the voices around us — both animal and human — can also be a kind of meditation, a way to rest.

Or not, as Chirp reminded me this morning.

Chirp is a salmon faverolle, a stocky little hen with creamy wheat and rust plumage, and — unlike my other faverolle — an improbable black beard. She is strikingly beautiful, though I suspect she is mildly retarded (here I will resist the temptation toward tasteless blonde jokes). When Chirp was a chick, she would stand stock-still for long minutes, staring at the cardboard wall of the brooder. While the other chicks ran about, scratched, pecked and otherwise acted normal, Chirp would just stand there and, well … chirp. It was sort of sad, and the rest of the little flock, including me, became protective of her as she grew into a slightly ditzy but still highly verbal pullet.

Chirp is proof that it is usually a mistake to name a long-lived creature after a childhood characteristic. I haven’t the heart to rename her Grate or Rasp, but her adult voice lacks the sweet vulnerability of her fuzzy chick days: 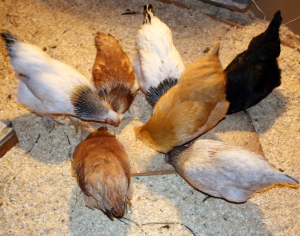 To be fair, Chirp sounds like this only when she’s crabby. Often, she joins companionably in the flock’s morning coffee klatsch, during which I drink the coffee and they enjoy scratch, a kind of chicken “candy” comprised of cracked corn, milo and wheat:

Sometimes, the first sound I hear from the girls arrives earlier, through a nursery monitor in my bedroom as I am beginning to stir from sleep in the predawn dark. The first time I heard it, I could not believe my ears.  My chickens were singing up the sun, just like other birds:

My best friend gave me that nursery monitor years ago; we live far apart now, and don’t often see each other. I sometimes keep her messages on my answering machine just to hear the affection in her voice. And last night I called the phone of my friend Ray, who died last week, and recorded his outgoing message so I could hear his voice a little longer, before allowing it to trail him into the ether.

These voices, they matter.

← Since we are not the ones dead
Needless harms →