Today marks a milestone in the life of my little flock: the arrival of the first egg. Ginny, the black Australorp who began squatting for me a couple of weeks ago  (see Nov.  7, “Assuming the position”)  delivered a perfect brown oval this morning.

I knew the moment had arrived when I heard that unmistakable egg cackle.  You’ll probably recognize the sound:

I had to poke around a bit to find the still-warm egg, as Ginny declined my hint to lay in the nest boxes, in which I had placed several fake eggs from a crafts store. Often this little trick works, and I have seen another of the pullets looking intently at them as she, too, approaches the cusp of henhood. But Ginny left her first egg in the cozy shadow of a straw bale.

It’s a beauty, though small, as “pullet eggs” tend to be; in the photo above, I’ve placed a pallid store-bought “large” egg next to Ginny’s. 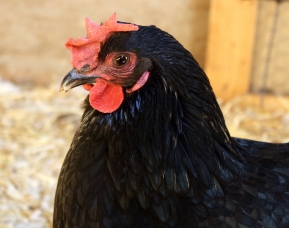 Afterward,  my newly baptized hen seemed pensive — slow-moving and inward-looking — as if she sensed something momentous had occurred.  And it had:   Among the heavy breeds, Australorps are prolific layers, and if Ginny lives out her natural life, she is apt to provide me with upwards of 600 eggs.   One little black hen.  Astonishing.

Ginny and the rest of my flock will lay most of their eggs during their first three years,  then fewer each laying season as they grow older.  We humans tend to value other species by what we can get  —  or take — from them, up to and including their lives, so diminished productivity means the stewpot for many hens. But not my girls, who I appreciate for much more:  their physical beauty and industrious nature,  the peacefulness of their company, the comic exuberance of their running and flapping about the yard.

One of my brahmas — the gorgeous black and white birds with feathered feet pictured in previous posts – began squatting last night, so her first egg will be here soon.  In the weeks to come, each of my pullets will  follow Ginny out of adolescence and into her life as a laying hen.